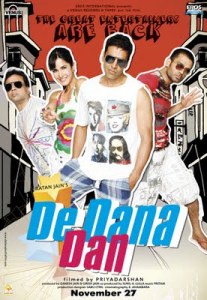 Ever since this movie got released I was told it’s a Must Watch. I had my doubts. The thing is that when the Last Action Hero starts constantly appearing in comedy roles you need to adjust to this change. After watching Housefull, which I only enjoyed because of the one-liners and Arjun Rampal’s hot looks I wasn’t too keen on this Akshay starrer but I loved the hit trio of Akshay Kumar, Sunil Shetty and Paresh Rawal who were awesome in Hera Pheri and the sequel so I was quite looking forward to the trio again in this movie.

The movie is extensively set in Singapore where Nitin (Akshay) works for Kuljeet Kaur (Archana Puran Singh) because his father took a loan from her (he was employed as her driver) to educate Nitin and to pay back that loan Nitin is destined to work for the meanie Kuljeet who happens to dote on her canine companion Moolchand (with a Ji for the rest of us). Nitin is in love with Anjali (Katrina Kaif) and basically lives off her, financially speaking. Her father decides to get her married into a ‘good family’ and thus ensues mayhem.

In all this, Nitin has a partner in crime, Ram Mishra (Sunil Shetty) who works in a courier company after being rejected by the local film industry, and is just as much a loser as Nitin and lives off his girlfriend Manpreet Oberoi (Sameera Reddy) who is also being married off to someone else.

In short, it’s a comedy of errors and as with every movie by Priyadarshan you can expect some fantastic one liners and crazy comedy.

In my opinion this movie was far better than Housefull. Watch it if you need company while doing your nails like I did. It’s not one that requires your full attention.