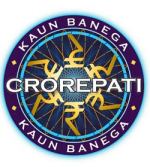 This is the Indian version of Who Wants To be A Millionaire and don’t worry – it’s properly licensed and not lifted like most Bollywood movies! It’s now in its fourth season and is being screened weeknights on Sony Entertainment Television. The show is being anchored by superstar Amitabh Bhachchan and it started off with a big bang on his 68th birthday on 11th October. Also the new logo has the new Rupee symbol in it.

I’ve watched 3 episodes so far and I’m quite mesmerised. I’ve never watched it before but since I’m quite a TV addict of late and of course a fan of Big B’s I have started watching it and am quite enjoying it. The questions are great and the contestants, so far, have been quite entertaining and very intelligent when they start explaining how they get to the answers. The contestants are not from well-off families so it’s really heart warming to know how they will spend the money and so far the plans have been pretty selfless. One contestant has dreams to build a library in his village.

So far there’s been a glamour factor as well with other film stars turning up as the Ask the Expert. Overall it’s very entertaining and informative too. Some questions are very Indian history related but I did manage to find out that an octopus has blue blood! 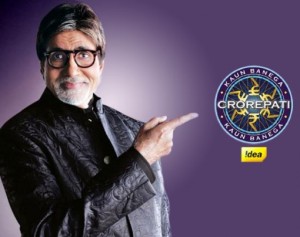