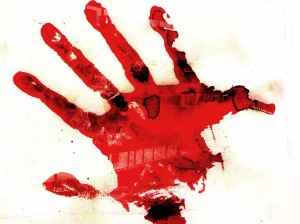 Cathy lived with her mother who did not mind the fact that she spent more time at ours than anywhere else. She was the same age as Jemo, around 29 and was a receptionist at some big manufacturing company in industrial area. She had a petite frame and large inquisitive eyes. She had a good educational background, pretty, well spoken and well a tad bit crazy. My suspicion for her insanity was the fact that she and Jemo had hit it off and were still together for six years to date. What she saw in Jemo even he did not know. The job as a receptionist despite the university degree stemmed from the fact that the economy was on the downturn and any job was as good as gold.

As I was climbing the stairs to my third floor flat, I heard some unusual commotion. Instead of the usual fanfare of radio music, football games on telly, porn at low volumes, loud chattering of inebriated teenagers or the bass laden rumble of gossiping men, there was a unified chatter from most of the flats. There was something that had unified them all. I continued my conquest of the stairs two at a time, fumbled for my keys, opened the door and got in. Jemo, Cathy and two of her friends were sprawled out all over our living room, fixated on the news been aired on the television. I was a little disappointed when everyone’s acknowledgement to my arrival was just a glance in my direction and back to the television.

It made me happy to note that Cathy had upheld my arrangement with her in regards to no one using my favourite chair. It was a well worn sofa I have lugged around since my college days, but my throne nonetheless. I kicked off my shoes, planted myself on the sofa and decided to see what all the seriousness was about.

Apparently in the crackdown following the election violence, police had cornered a gang of some wanted criminals in town. Nothing new as they were probably ratted out by a rival gang or they had not paid the big boys in the police force the regular ‘protection fee’ or the usual reasons that any nation who underpays it’s police force faces.

I pulled out one of the bags of weed that I had just purchased from my jacket and fished around under my throne for a magazine and some rolling papers. As I plucked on the greens and the trichome laden stalks, I also got engrossed in the news like everyone else in the room. This gang had been terrorising residents of the two largest slums in the city. They were systematic and clinical in their killings but always left behind a calling card, a packet of maize flour. The news analysts and investigators had various theories behind their strange calling card. What amazed me is none of them had bothered to find out why they were killing people but were very keen to deduce the reasons about what they were leaving behind.

I licked the gummy end of the rolling paper once the leaves had set in place and twisted the paper into a tight conical roll. I tapped the end to let the leaves settle a bit more, pinched the larger end of the cone and twisted it down. I lit the joint and took a drag. The weed was packed loose so there was a lot of air in it. A lot more that the one I had tried in the alley earlier. I took a few more drags and as the aroma of the smoke permeated the room and its crowd, one of the girls turned and looked at me. I knew that look, it meant ‘I want some of what you are smoking but if you try and pull a line on me, I will slap you six ways to Sunday’. I knew this because I had learned the hard way before when I was younger. When I was foolish.

I took a couple more drags and stretched my arm in the direction of the staring girl. She took it from my hand and nodded in appreciation. We all continued watching the news.

“The police force had sent in many undercover officers to infiltrate this gang but none have returned alive. The gangs’ hideouts and meeting places are closely guarded and the operations of these notorious men has been largely unknown till today” said the buxom news presenter. The only reason I could imagine she was on television was because she either slept (or is sleeping) with the station boss or has some political connection ensuring she keeps this job.
“Our team of reporters on the field seem to have conflicting reports but it seems that the police arrived on the scene and had to shoot back in self defence”

Given the amount of times the police had “arrived on the scene and had to shoot back in self defence” bullets must be extremely cheap or easily available in our poor country. The news presenter continued to illustrate the bravery and quick thinking of the officers and how the investigators were now combing the area in which the shoot out happened. “Among various guns, knives, chains and drugs found in this dark alley behind Keekorok road, the officers have found some mobile phones and a SIM card that will assist in tracking other members and the operations of this gang”

“The images we are about to show you are graphic and violent. We advise viewer discretion” continued the presenter. The screen changed from the cityscape backed newsroom to a city alley. The picture was grainy and almost amateur but I could tell that the cameraman was trying to do his best to get the effect of the massacre through his lens. There were overturned dustbins, strewn garbage and gunshot riddled walls. There were policemen in sanitary gloves and there were reporters running all over the place. It was more like a scene from an open air trade show than a crime scene. A bit counter-productive while searching for clues I thought. There was a policeman with a bandaged arm with what I could only pray was a male nurse attending to him.

Weed or marijuana belongs to the cannabis family and is a psychoactive drug. While many drugs clearly fall into the category of either stimulant, depressant, or hallucinogen, cannabis exhibits a mix of all properties, perhaps leaning the most towards hallucinogenic or psychedelic properties, though with other effects quite pronounced as well. The weed was good and I was feeling all these effects and more at the same time. I continued watching the news with curious abandon but more because I had nothing to do. If I had known what I would see next, I would not have lit the joint in the first place.