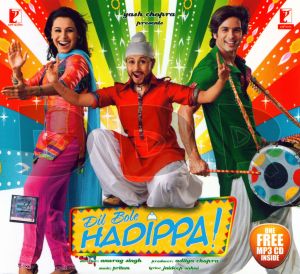 Dil Bole Hadippa is a story of Veera Kaur (Rani Mukherji) who lives in a small-time village but is extremely obsessed with playing with cricket in the big league. Her favourite player is Sachin Tendulkar who she is extremely crazy about and she plays the game quite well too. Veera works with a theatre dance group and dances with the theatre’s star performer Shanno (no other than Rakhi Sawant) who makes members of any audience sit up and notice her – sometimes for all the wrong reasons in real life!

Veera dreams of leading the Indian Tigers team which has lost 9 times. This team is led by Chaudhry Vikramjeet Singh (Anupam Kher) and his team has never won the much-covetted Aman Cup against their rivals, the Pakistan Champs who are led by the very handsome Pathaan Liqayat Ali Khan (Dilip Tahil).

The story is how Veera Kaur becomes Veer Pratap Singh – no, no sex change involved. Just a bit of fake facial hair from the theatre company comes in handy and she guises herself as a boy just so she can play cricket.  She manages to convince the new team captain Rohan Singh (Shaheed Kapoor), who also happens to be Vikramjeet’s son, to include her in his team and then all hell breaks loose when at a match Rohan gets to suddenly find out her real identity.

The movie is nice – you expect such a family entertainer from the Yash Raj banner. Veera Kaur is funny as Veer Pratap Singh and also manages to get herself accused of a sexual harassment charge… The outcome is hilarious. The one liners are quite funny and it was also a very pleasant surprise to see Poonam Dhillon on screen as Shaheed Kapoor’s on-screen mum.