The Easy Life of the Last Born…? 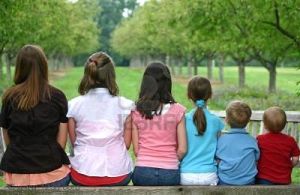 It is widely believed that the last-born child in most families is the spoilt and pampered one. This child usually gets away with a lot and is usually the cause of counselling for older siblings at a later date in life.

I’m the eldest of three siblings and I know, after reading up a lot on this and also being a parent of two kids that the eldest child is a parenting experiment. From what you are fed as a toddler to who can hang out with as a teenager right up to who you should get married to – as an eldest child all this was decided for me.

While growing up, I guess I never resented it but somewhere down the road in my late 20s I started making comparisons with my life compared to my siblings’ lives. They had it so much easier than I ever did. While my parents weren’t fanatically strict with me I somehow feel they could have let loose the reins just a wee bit.

On the other hand when I speak to some last-born kids, they feel they had the worst of it. Rebellious older siblings made sure that their lives were well controlled by their parents and there was no way they could get away with anything at all. One friend even said the only reason why she studied so much at University was so that she didn’t have to come back home to her parents and be married off.

It would be wrong to blame parents totally over here. Until I didn’t become a mother I did not appreciate my own parents fully. I have realised the sacrifices and the things they have had to go through as parents have been well worth it. I also know that despite saying ‘I will never do that with my kids’ I tend to think like my Mum when I’m doing something for my kids. I won’t call my techniques ‘parenting experiments or mistakes’ but I can confidently say that I have gleaned the best watching other parents and tried to instil it in my children.

I’m a single parent and it gets difficult role-playing for both parents. I sometimes get frustrated that I may not be giving my kids enough, sometimes I fret I’m doing too much, other times I have sleepless nights worrying if I am doing the right thing but when I see my kids who are well mannered, polite children who are mindful of others I feel I have not done too badly.