It’s coming on to three weeks now when my son announced to me that he wants to become a vegetarian. I grinned at this because Googlee loves to eat meat and the days I’d cook vegetarian food he’d ask if he could have a slice of ham on the side with his food. So when he told me this I thought it was just a phase he’s going through.

Initially I thought it was a project they were doing in school about food and diet and perhaps that influenced him but no, they’d been learning about insects and I also asked his teacher if there had been anything that might have influenced his decision and she said no.

So trying to live up to the label of Good Mummy, I indulged my son. I thought four days into this fad of his and he’d get fed up or bored and start missing his favourite non-vegetarian dishes and indulge but no way Jose. On Day 4 I completely forgot to make a separate vegetarian dinner for him and served up meat tortellini with sausage and he looked at me with his big brown eyes, rather hurt, as he held up the bowl at me and said, ‘Have you forgotten that I am a vegetarian?’

Very quickly I made him two ‘pronthay’ (Indian shallow fried bread) with a quick potato curry and yoghurt, which he relished and thanked me for. Ever since then I have been making sure that I make an extra meal in the evening for him and sometimes because I’m so exhausted when I get home from work I just end up making one vegetarian meal for all of us.

My parents’ cook indulges him as well and makes sure she makes an extra meal of his choice and now I have to be careful what I pack in his break tin because a toasted chicken sandwich or sausage rolls will just not do anymore.

Yesterday I asked him about his decision in depth. You know… interview type! I sat him down with me, opened my red notebook and took notes. He was also very good with the interview, pausing to allow me to finish writing even though I know I didn’t need that time. This lad is a gem.

Anyway, here’s a short interview with Googlee. He was really excited that I was going to conduct this interview and expressly asked me which newspaper it would appear in and was impressed it would be up on Kamal’s Korner.

Why have you given up meat:

Because I didn’t like the meat. It didn’t feel healthy inside my body and I never felt comfortable. It felt like a bad stomach ache and when I swallowed it came down like an earthquake then it hit my back then in my stomach and then it just got stuck over there.

(All this demonstrated with actions)

When you used to eat meat, what were your favourite dishes?

(He licks his lips at this before he answers)

Sausage, Bolognese, Nuggets and… (pauses to swallow accumulated drool) CHICKEN TIKKA! (He yells that out)

But anyway you know vegetables are healthier inside of my body.

(He pauses to allow me to finish writing)

So why do you think vegetables are healthier?

When I swallow they come slowly into my tummy and not like an earthquake. Also you know what, my poo poo has stopped hurting.

Then on a side note he asks me: Are you telling me food goes brown in the body? That’s funny. Very funny, he said in a somber, thoughtful voice. So I ask him what he meant by that and I deduced someone’s been peering into the loo before flushing so we got an encyclopedia out to see the digestive system while we were at it.

So far how do you feel having turned a vegetarian?

My friends say I’m becoming healthy. I only miss eating chicken tikka. Maybe you could take me for paneer tikka. But only if it’s vegetarian. 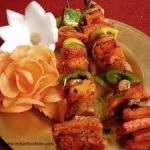