I have had to deal with a lot in life. I know everyone in this world goes through some turmoil or another and you’re lucky if you don’t or have taught yourself to rise above it. People who meet me now feel I’m very outspoken and don’t mince my words. When I hear that from them I feel a sense of achievement because for many years I never had the guts to speak up for myself at all. I’d just take in whatever was being thrown at me and just boil in resentment.

I suppose the proverbial straw did eventually break my back and I started speaking up for myself and others who couldn’t. That doesn’t make me some kind of super-heroine in tights, dodgy knickers and a cape. It just makes me someone who will display zero-tolerance to bullying. We do know that people who bully are usually cowards themselves – they have something to hide or are greatly fearful of something so pick on lesser mortals to appear larger than life.

Even a cornered rat will fight to the end so my suggestion is that don’t take any kind of bullying. When within families you get exposed to emotional blackmail of all kinds. If you’re ok with it, then that’s your look-out but if you’re sitting there, boiling under a stove called resentment it’s best to speak up and be heard. Sometimes it’s hard to speak up in front of someone elder than you in a family out of respect. I’m not telling you to get into a screaming match or a fight. You’d probably be surprised that the bully in question probably doesn’t realise the extent of the emotional drama going on so maybe a gentle nudge in the right direction might just be the solution of your problems.

I sometimes indulge in those silly Indian TV serials and have realised that the BIGGEST form of bullying for someone to get them to do something is to use death. Not as a threat to the other person but to say ‘You can do what you want when I die.’ This is usually followed by a lot of sad background music and tears and at least 13 flashbacks. The fear of losing this ‘loved one’ usually brings the person right back on track but ends up making them dysfunctional and they carry grudges and what-not. Not unlike real life.

It may be easier said than done but it’s always a good idea not to allow anyone to bully you or emotionally blackmail you. My son was getting bullied in school and had started making excuses of a stomach ache or some sort of excuse just so he didn’t have to go to school and face the girl who bullied him. When I asked him what was going on, he said this girl was always hitting him and tearing his books and saying ‘mean things’ to him, and he could not hit her back because ‘boys don’t hit girls’. I was proud of him that he had heeded what I’d taught him but this bullying was getting out of hand I don’t like to be the type of Mum who is always at the school’s office complaining about something or the other.

So I just taught my son to stand up to the girl and tell her not to hit and not to say anything mean to him. And I also told him don’t be scared of her because she is more scared than you are. I also taught him to say ‘Bullies are cowards’. I let a week pass and asked him what had happened and he said when she started pushing him around again he told her to lay off and said bullies are cowards and she started crying. My son said he felt bad he made her cry but I explained to him that this once it was ok. And it was. They’re best friends now and he wants her to come to his birthday party too… 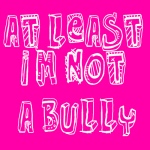