He Is THE Fareed Khimani

I caught up with Fareed Khimani, the bloke who brings you the Rude Awkening on X FM every weekday morning. He shares some insights with Kamal’s Korner…

If you weren’t The Fareed  Khimani what do you think you’d be?

So why do you think the likes of me wake up early just to listen to you on X FM’s Rude Awakening?

Cause you got a dirty mind…no, I think seriously because like minded people, also don’t want to take life to seriously…

You make me gasp for all the wrong reasons sometimes when I listen to you on air. Your audacity and guts have me in peals of laughter and I wish I could say a fraction of what you do. Have you ever been on the receiving end? Has anyone ever complained about you?

All the time…but truthfully, its also important to understand media laws…its a huge responsibility and a privilege…so push the boundaries back, but do not go overboard (sometimes I do tho)
How do you deal with fans who clamour all over you, especially when you’re having a badass day and really don’t feel like any human interaction?

I tell them to sod off!! (Kidding)…no, look I don’t mind stopping for a photo or a quick chat.. It is awesome actually…can make a bad day turn good…

If you weren’t in the media bizz, what would you be doing?

Selling insurance…no, I would be a pilot actually…

Is bromance your thing?

You’re always well kitted. Is it a conscious effort on your part or do you just wear whatever you feel like and not care what anyone thinks?

My wife dresses me…truthfully though, I love clothes. I looove clothes….

Can you cook? Like REAL cooking and not those boys night out korogas and bbqs.

Black berry…I am not into toys..

What’s been your most extravagant indulgence in terms of spending your hard-earned cash?

My Landover defender…and our wedding…

You’re so popular that so may people I know deem you a demi-god. What drives you to be Fareed Khimani?

Well besides my inflated ego after that question…nah, I get to be the guy that gets to say what everyone is thinking…that’s the best part…

You’re actually one of the few celebrities I know who isn’t stuck up or has his head up his back side so far that the lips get mistaken for an extra kidney. Why do you think these so-called celebrities behave the way they do? Is it beneath them to be nice to the people who adore them and actually afford them their star status?

Because they take themselves a little too seriously….

What’s your opinion on Man-Bags? If you have one, what do you carry in it?

On a scale of 1-10 (10 being highest) how scared are you of dogs growling and foaming at the mouth with fangs for teeth?

Tell me of 5 things you will not leave the house without.

Sunglasses, credit card, my diary, time or Newsweek and uh…hmmm…coffee in some form…

My nephew wants to be you when he grows up. What’s your advice to the likes of him? 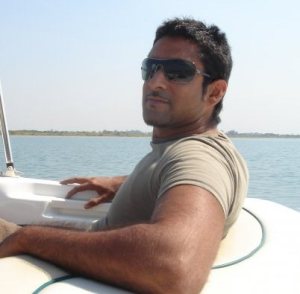