Superstition and Suspicion Have No Cure

This is something I often quote to anyone and everyone around me. I’m just glad that I don’t have a superstitious nature or I’d be a basket case.  I look at people blankly when they tell me to indulge in some form of superstition just to counter any evil that might come my way. While I don’t endorse these practices I don’t judge you if you do. It’s your life, your belief and I have no right to tell you how you should go about doing your business and just as long as you don’t force-feed your opinions down my throat, we should be ok.

There are so many superstitions that I know of. Many come down from generations, some I hear from friends and the rest I get to read about when I’m bored. I have a long list and a few include not cutting nails at night, not washing hair on Tuesday because it brings ill fortune on one’s brothers, not to sweep after sunset in case you end up sweeping away your good fortunes, not going off on a journey if a cat crosses your way or if someone calls you back as you embark your journey, itchy palms denote money either coming or going, flickering eyelids denote an ominous omen that something horrid will happen and the list goes on.

As for suspicion, once you have the bug in your mind, nothing will ease it at all. You get the wrong end of the stick by being suspicious and won’t return to any form of normalcy until you are assured you were either wrong or right. There is no grey area with suspicion. Once it enters your mind, everything is either black or white. 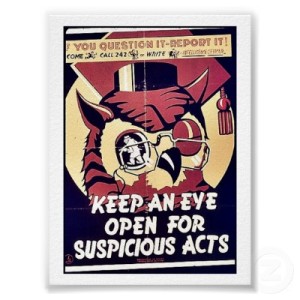 I have encountered a lot of people who practice both superstition and suspicion. For me there’s always been a feasible solution to either and I like to work with logic. I don’t like to go to seers or astrologists simply because I do not want to know what my tomorrows will bring. I have watched many people fall apart living for things that will never happen, and if something does happen, all they can say is I told you so. Wouldn’t it have been better in the first place not actively seek the negativity? Don’t you attract negativity by inviting it in your life with a constant thought process?

Every coin has two sides and I suppose if you are superstitious or even suspicious you know why you’re doing it. Because in either I see no positivity or productivity, I indulge in neither, especially the superstitions. I don’t agree to live under the umbrella of the fear of the unknown. I’m happy in my oblivious world that I will die very soon just because of all those chain mails I didn’t forward, the hair I wash on Tuesdays, leaving on a journey because someone sneezed, not believing in black magic because my faith in God is far stronger and a whole host of other things. Life is complicated only because we make it so. Believe me.

And remember, a black cat crossing your path simply means the animal is going somewhere…