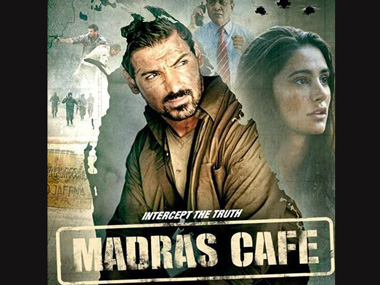 Madras Cafe is an intense, thought-provoking, docu-drama high-lighting events preceding the assassination of Rajiv Gandhi 22 years ago. This is an important and informative film that educated me about the long and bitter guerilla war in Sri Lanka and India’s involvement in it. This is one of those film’s that you leave and rush home to look up everything you can on about that period in history on the internet.

It makes you think about what a threat India is to the west as an emerging superpower in the global market and why they are so threatened that they would even support terrorists in order to get a stronghold on India’s borders, be it in Sri Lanka or Pakistan.
The question also arises, that in the end, who gained from Rajiv Gandhi’s assassination? Certainly not the Tamil guerilla leaders who orchestrated the assassination because their leader is now dead and his army disbanded, not the western forces because they still haven’t managed to secure a foothold on this volatile island and so it was most likely, shockingly, the BJP party that was in power in Dehli at the time because they were threatened by the possibility that Rajiv Gandhi would win the next election! The Indian government was aware of the plot to kill the ex-prime minister but did little to nothing to stop it.

My friends and I were bawling our eyes out watching these real-life events re-enacted on the screen. My heart goes out to Sonia Gandhi, it will be a heart-wrenching film for her to watch. In conclusion,this is a serious film that must be seen because it makes all the other crap we watch seem so frivalous. Enjoy! I give it 5 stars!