What so fair about being fair? 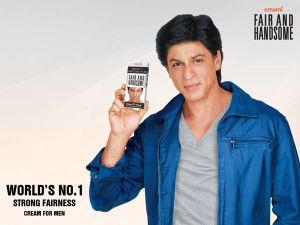 If you’re a great big fan of Shah Rukh Khan’s and get worked up if the slightest criticism is sent his way, then I strongly suggest you raise your forefinger to your mouth, wet your finger, turn the page and carry on reading the next page. I’m not a great big fan of SRK’s but I don’t turn my nose up at his work. He has worked very hard to get to the status he is at and you can’t just become the Badshah of Bollywood just sitting around laying eggs or bleating like a goat (which he does because every other mimicry artiste has a field day with him). No doubt SRK has risen from being a stage actor, daytime soap actor to what we call a Bollywood superhero.

With this newfound fame and adulation comes a social responsibility, I strongly feel. So while he is not busy getting into fights at cricket matches, allegedly having an affair with Priyanka Chopra, coming to blows with Salman Khan because he felt his TV game show was more popular, getting the gender of his baby found out amongst many other manenos, SRK has now taken to endorsing fairness creams. That’s right.

Millions of people look up to him. When someone in his power endorses something, it speaks a lot of who he is because of what he endorses. As you know in India, fair skinned people have always seemed to have gotten the upper hand. Why endorse a product that encourages this horrid practice? Isn’t it saying that to be successful like SRK you have to be fair first? Think about the psychological effect such adverts can have on many people who are very impressionable. It’s not ‘just an advert’. You market a product you believe in. And if he’s doing this just for the money… then that too speaks a lot about his character.

He’s not the only Bollywood star to ride on this stupid brigade. John Abraham, Deepika Padukone and Aishwariya Rai Bachchan are a few others who endorse fairness creams. The social message basically going out is that to be beautiful and successful in life, you must be fair. I’m sorry but I do not agree with this. Stars have a social responsibility being such public figures. They need to THINK before they do things like that.

There are so many types of discriminations in this world but this one really gets to me. How can a fair or light skinned person have more of an advantage in life? I’m quite fair skinned. My brother and sister are dusky compared to me. All my childhood and teen years I wished I had the same colouring as them. My sister in law is one of the most dusky beauties ever. She has eyes like a doe and her skin is darker than chocolate milk and she’s so stunning and I’ve always wished I was as beautiful as her. Also did you see that fancy-shmancy magazine last week that decided to airbrush Lupita to enhance her looks? What on earth was THAT all about?

Life is not an Instagram filter. You are beautiful the way you have been made and being light skinned doesn’t make you a better person at all. Stop endorsing and using such products and kill off this industry because as long as it thrives we will never think highly of ourselves. We allow commercials to infiltrate our minds and let us think otherwise about our appearance. Just think of this, if all of us stopped using such products, would this multi-billion entity thrive and succeed? No. In fact we would succeed in life knowing that the colour and tone of our skin doesn’t dictate our level of success in life.

Ditch the fairness creams. They do nothing for you. You are damn gorgeous as you are.