Please give a small bio of yourself.

My name is Vikash Pattni, and contrary to my surname I’m not a millionaire (well at least yet).
While many people have no idea that my name is spelt with a H, I too had no idea about
what to do in the future after high school so I followed what most of my friends were doing –
becoming accountants! My mother was being convinced that it’s the right choice for me by
all the aunties boasting about how their sons were doing so well balancing sheets for a living
and I was worried about balancing my diet!

With a confused mind I pursued ACCA and at the same time kept working at various places
depending on who paid better. Somehow just hopping from one job to another every 6
months, I ended up working for a Bank! My mother felt like she was living the American
dream! She would welcome me home like tulsi of kyunki saas bhi bahu thi! But I wasn’t
enjoying banking at all so after watching 3 idiots multiple times, I manage to convince my
mum that I was the R Madhvan from 3 idiots and I wanted to be an actor! She first
responded saying “Yeah and I want to be the president of USA” but then she gave in and
said fine if you can figure out how you plan to be an actor then go ahead!

That’s the day I changed my phone ringtone to “tera dhyan kidha hai tera hero idhar hai” and
walked into my life’s next phase in full slow motion walk heading towards my dream! Met a
few people along the way who said go through modelling, but besides a new Facebook
profile picture, it gave me nothing more. Things worsened at home with my mum’s health
taking a beating, I needed something more reliable with a steady income. The cheapest
course available then was graphic designing and I could learn it in a month so I proceeded
with it and got my diploma in Graphic design.

After a couple of freelance jobs and designing various free business cards and logos for
people who took the “free” in freelance quite literally, I managed to get a job at The Asian
Weekly where I designed the paper for close to 2 years. At the same time I would get to
know about auditions at various theatre plays, TV series and even radio! I kept swinging
from one audition to the other like Tarzan holding the rejection rope and one day the rope
lost grip and I landed a job as the drive time presenter on East FM and a role in a series that
aired on Maisha magic. Today it’s been 8 years since I have been on radio and I have acted
in a couple of TV shows and stage shows in the past 5 years and also emceed events.
And you can find me on Facebook and Instagram as vikashpattni

Well in my mind I think I am some macho action star who directors are fighting to cast and
who girls are screaming for when I tell them I am the peanut butter you’ve been craving for!
But at heart I am more realistic where I all I keep chasing is love and affection. I am waiting
for blessings that aren’t in disguise

How do you think people perceive you?

Once I was having a really tough day after being told some nasty stuff by people I hung
around with and at auditions. Once home, I saw my mum seated calmly watching TV, I
walked up to her and shared the contents within my mind with her, telling her how I have
been told I am this and I am that and it really hurts how people judge so quick. She paused
her show, handed me the remote and asked me, what is this?
I said remote!
She said: No I think it’s a donkey! But by me thinking of it or calling it a donkey does it
become one? NOPE! Similarly what people think of you will not change who you are so don’t
worry about them!

What do you think about when you’re alone in your car?

Why didn’t I just take the bike instead? Which Arab is this guy having an affair with to be
driving so slowly like fuel isn’t an issue? Is there enough pressure in my front tyre?

Tell us something we don’t know.

In 2012, a Bumble Bee Tuna worker was accidentally cooked in a 35-foot-long pressure
cooker with 12,000 pounds of canned tuna. 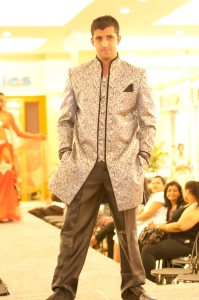 How many friendships have you ruined because you refused to play a game of Monopoly
mercifully?

Let’s just say the last time I went to jail, NOBODY visited!

How long does it take you to scroll through Instagram before you eventually give up?

I feel my sole purpose on Instagram is to inform Katrina Kaif that I am in love with her! In fact
by chance if I somehow take a break from Instagram and miss any of her posts, I get a
scolding in my inbox from people who wait for my comments on her pics one of them being
Javed Kana! But until my dad doesn’t come knocking on the washroom door, I could easily
spend hours scrolling on the gram from subah to sham.

What do you think cats dream about?

About the remaining 8 lives!

If you were a Disney/ mythological character, who would you choose to be?
Flynn Rider known for his charm and quick-wit 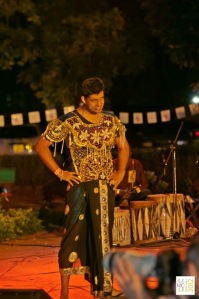 You’ve got to give one up:
Coffee
Cheese
Give up coffee

Why would you not give up the other?

Ask Katrina how cheesy I can be with my comments on her pics and after all dil cheez kya
hai aap meri jaan lijiye!

What do you think is completely overrated in this world?

Blue ticks!
Get them on WhatsApp and you are unidentified but getting the blue tick on Instagram gets
you verified BOHOT NA ISNAFI HAI!

What series are you watching currently and would you recommend it to others?

If you have no financial restrictions at all, what would be the one thing you would buy for
yourself?

I am quite happy with what I have but I would love to buy the house my mother grew up in
Mombasa and the first car she drove which too is in Mombasa!

Do you ever compliment yourself? Do you acknowledge your success or the good job that you’re
doing?

As a performing artist be it in acting or emceeing or rjing, I rely on the audience reactions!
And unfortunately it makes me quite dependent on others to tell me if I am doing a good job
and not many people are generous with compliments but they do vote for me and make me
win awards! Despite that I kept comparing my progress with others and what my future holds
as I feel I am very far from my dreams but its changing now and I realize where I started
from and where I am now has a decent distant in between and I am grateful for all that I
learnt along the way. 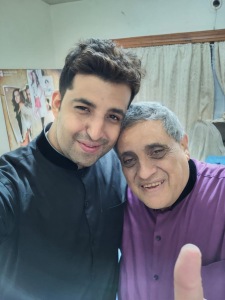 Who applauds your success the most?

Whenever I am sharing a stage with co actors/ co emcees, I would always find someone
from their family taking their videos or pictures and I would feel the void that nobody from my
family is there. But once home my father’s eyes tear up, my best friend Ravneet won’t
applaud because her hands usually aren’t free. She is holding her pen writing her
observations but definitely whistles, and her husband Rushy or my friend Darshan would
share their recordings of me if they were at the event! I have always been my mother’s pride
and I remember vividly my grandfather telling his friends that he doesn’t regret not earning a
lot of money in his life because he feels his grandson was his biggest wealth!

My address because how else will I get things delivered to me
Running water, I have spent years looking for water just to flush!
The motor bike
My matching Bruce Lee tees that my dad owns, too.
My Rambo style Army jacket.

What’s your favourite holiday destination that you’ll go to again and again?

In 2018 I travelled to the United Kingdom and loveeeeeed it! I went for 6 days and still can’t
stop saying “Mind the gap”. The ease with which you can travel around using trains left me
mesmerized.

What’s your honest opinion on family Whatsapp groups?
They start as Hum Saath Saath Hai, but after a few days you are left asking Hum Apke Hai
Kaun?

Lastly, you’ve been gifted an elephant. You can’t give it away or sell it. What would you do with it?