Don’t EVER make this mistake…

I think at some point we go through a phase where we feel we can handle just about anything, and I mean anything. Let me explain. Last week I became the proud mother of a teenager and as annual tradition in our household dictates, we sat down to go through the family albums. My kids and I sat and oohed and aahed over the photographs of both the kids at various stages in life, from the hospital nursery onwards. Floods of memories came gushing into my head and I suddenly remembered some stories that had me asking myself what on earth was I thinking at that time.

I clearly remember my son was about two years old and my daughter had just turned six. I had some shopping to do that couldn’t wait so I took the kids with me to the supermarket. That was the first mistake in the series of mistakes that followed.

At the entrance of the supermarket I encouraged my daughter to get her own little trolley, which she did most excitedly, and I grabbed a bigger trolley and tried to put my son into the toddler seat on the shopping trolley. I’m not going to number my mistakes. I’ll just let you count how many I made in just one shopping trip.

So anyway, he wriggled like a captured worm, started getting fussy and held himself so stiffly that it was impossible to put him into the trolley. I sighed exasperatedly and carried him while pushing the trolley. Don’t ask how. I haven’t earned the title Super Mum from nowhere. I have worked hard for it.

You’d think that’s where it was all happily ever after but no, that’s where it all started going downhill. My daughter started putting random items into the trolley. The first thing she put in was a packet of condoms from the personal hygiene aisle. She climbed on the bottom shelf and reached out for the ‘sweeties’ and put them in her trolley. After a lot of cajoling and letting her pick a fancy children’s toothpaste instead, we moved on to the next drama. By now my arm was beginning to hurt carrying my son so I put him down and told him to start walking. No, that wasn’t the mistake. The mistake was that I accidentally passed by the toy aisle and then the manenos started.

My son’s eyes lit up and he ran to where the toy cars were displayed while my daughter abandoned her trolley that was filled with things I was not going to pay for at all. I was just going to leave the trolley abandoned somewhere. Sorry, but I’m just being honest.

I stood there a few minutes indulging the kids as they looked at the toys then called out to them to get moving as I still had some shopping to do and then my son started crying. Then he wailed, then he screamed like a banshee and then he did something unbelievable. He lay down on the floor and started screaming even more. I looked at him in horror. What was this thing, lying on the floor and what was it doing? Had I really given birth to it? 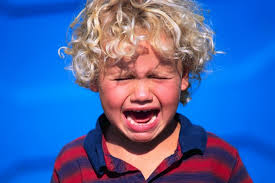 I decided to do what those fancy parenting manuals had taught me, so I just ignored his screaming and walked over his body and continued with my shopping. I don’t think he noticed right away but someone else did – his sister. Suddenly I hear my daughter bawling her eyes out. ‘YOU’RE LEAVING MY BROTHER!’ I froze in horror and looked back and see two children crying their eyes out like they’re being led to a guillotine and shoppers who had decided my business was suddenly theirs, standing there looking at me with judgmental eyes as my blood pressure reached brand new levels on the systolic and diastolic scale.

They won. I picked a small car and a doll, some milk and dog food and made a beeline for the check out counter. After that I told myself that they would only ever come with me in a supermarket when they have national identity cards. Well, you know what I mean. They do go into supermarkets now but I’ve mastered the art of the death glare so we are in a zen state when we go shopping.

Learn from my mistakes. I eventually did.